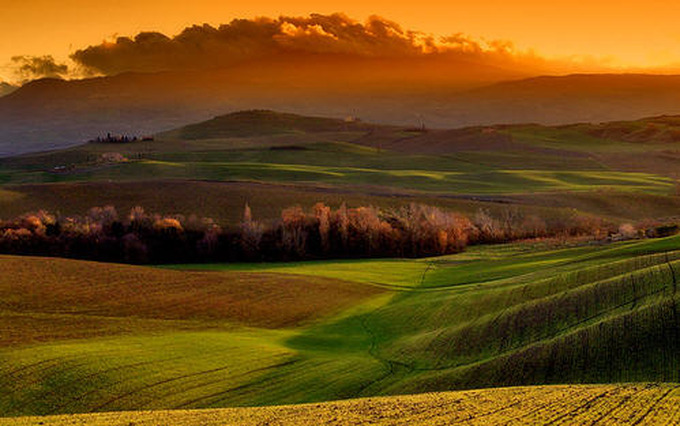 Tuscany is one of the 20 regions of Italy.
Blessed with natural and environmental beauty, a favoured position in the middle of the peninsula, an extraordinary artistic legacy, famous wines and a fantastic cooking Tuscany is a region that largely lives up to its press. Its fabled rolling landscape dotted with charming hilltowns and lined by cypress trees is considered the embodiement of rural chich, a favourite of PMs holidays and one of the world’s most loved destination.
Florence is the world Renaissance art capital and in itself boasts more world class art then many countries. Some people never venture beyond it but with some of Italy’s most striking Gothic architecture in Siena, the Leaning Tower of Pisa, the walls of Lucca, the Renaissance frescoes in Arezzo,  all an easy trip away, to do so would be a waste. The little towns nested in the enchanting Tuscan countryside are a unique world heritage. Tuscany is a region of villages, bell towers call out to each other as though united by invisible threads.  It’s curious the way in which the spirit of a Tuscan village has remained as small art centres in San Gimignano with its proud towers, Monteriggioni, Pienza, Montepulciano and Montalcino. Or in Volterra with Guelph splendour that enchanted the British writer D.H. Lawrence and the Italian movie director Luchino Visconti.  Or in the Etruscan towns of Cortona, Chiusi and Fiesole. From a hilltop Capalbio dominates the Maremma plain and the coasts as far as the Argentario promontory, not far from the Natural Park of Uccellina and Talamone with its beautiful scenery of shores. Inland, the lovely cluster of villages like Pitigliano, Sovana and Sorano and the thermal baths at Saturnia close by. Near Lucca the secluded Barga is the place of Italy’s oldest opera festival. There are also a thousand reasons to visit Tuscany’s villages. At the border between the Sienese and the Florentine Chianti Region, Radda, Gaiole, Castellina, Greve and Panzano are the best places to taste the famous Chianti Wine. In the Casentino, among green forests Poppi with its magnificent Castle, Bibbiena, Stia,Pratovecchio are equally a microcosm of relationships human and architectural. But don’t miss Anghiari for its incredible medieval urban planning and Sansepolcro with the Piero della Francesca’s masterpieces. Every curve, every hill reveals another village, another bell tower beneath. Another glimpse for the sky. All similar, yet infinitely different.