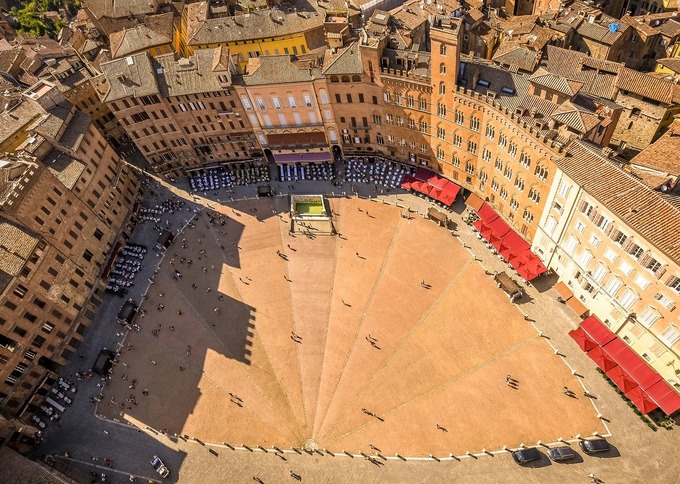 Siena, a Gothic dream, the Duomo and the Palio

Siena is a city of a tremendous poetical beauty! In the sense that as you as you get inside the medieval walls it appears in its fairy-tale atmosphere with its red brick towers and buildings.
There are so many altitude gaps that the views and the glimpses are multiplied, all stunning.


TOUR: PRIVATE OR GROUP
WHEN: EVERY DAY
DURATION: 6 HOURS
DEPARTURE: BASILICA OF SAN DOMENICO near the big tree next to the entrance
DESCRIPTION
One day is enough to get to know the main monuments of Siena!
Starting from San Domenico, the famous Gothic church dear to Santa Caterina da Siena who frequented it and which was born in the nearby Fontebranda district, a quick look at the Medici Fortress and then walk along Via de 'Banchi di Sopra among the magnificent palaces of the Sienese families with high-sounding names: Tolomei, Piccolomini, Salimbeni. We arrive at the fifteenth-century Loggia della Mercanzia and then in the extraordinary Piazza del Campo, for centuries the natural theater of the civil, economic and social life of Siena. The Palazzo Pubblico, the Fonte Gaia, the Torre del Mangia on the square are the backdrop twice a year to the ancient Palio race, with horses ridden bareback by the jockeys of the districts, a unique event in the world of which we will give you ample information .
We will visit one of the 17 Contradas that participate in the Palio di Siena exclusively, being welcomed by a Contrada member to  the Contrada Museum and in their church, for a full immersion on the Palio, its functioning and its ancient tradition.
In Piazza del Campo, one of the most beautiful squares in Italy overlooked by the fourteenth-century Palazzo Pubblico, free time will be given for lunch.
After lunch we will continue with the explanation of Piazza del Campo and how the Palio takes place. With a walk on Via di Città we would have the opportunity to stop and talk about other noble Sienese residences: Palazzo Chigi Saracini and Palazzo delle Papesse.
Once in Piazza Duomo we will talk about the beautiful buildings that overlook the square including the Archbishop's Palace and the Hospital of Santa Maria della Scala and then make our entrance into the Cathedral where we will focus on all the wonders of art preserved inside among which the splendid floor made in two centuries with marble inlays and the Piccolomini Library, considered "the small Sistine chapel of Siena, stand out.