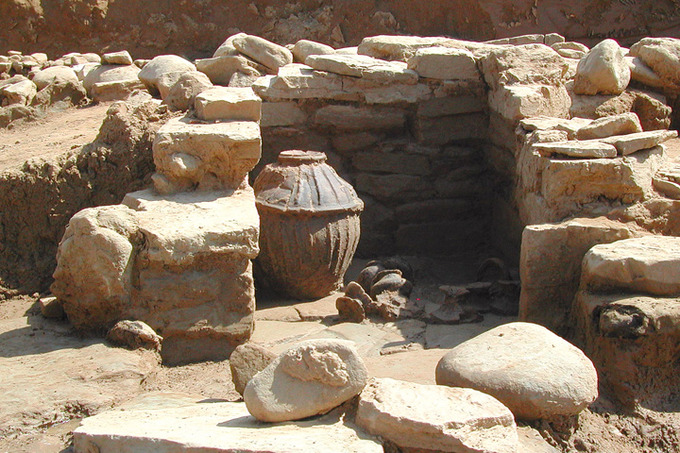 The Etruscans in Cortona: the Etruscan Museum and the Tombs

The guided tour of the Etruscan Museum in Cortona (MAEC) and of the Etruscan Tombs called Melone 2nd and Camucia Tumulus is a journey into the past to discover the incredible Etruscan civilization flourished between the 9th and the 3rd C B.C. when Cortona was one of the most important cities of the Etruscan Confederation.
The history of the Etruscan Museum stretches back to 1727 when the Accademia Etrusca (Etruscan Academy) was founded. The academy’s statutory goals included the dissemination of historical and artistic culture through key-tools such as the Library and the Museum both of which were public right from the earliest stages; over the past three centuries the Museum has undergone extraordinary development all the way to its final re-arrangement in 2008. The museum currently consists of two main sections respectively devoted to the Accademia Etrusca and the Etruscan and Roman city of Cortona; the former section accommodates materials providing a unique testimony to the life and continuing efforts of the best known cultural institution in town. Such materials range from the earliest bequests from academicians in the 1700 and 1800s to materials acquired over the centuries: the most valuable pieces – real “symbols” of the Cortonese culture – include the Etruscan bronze oil lamp, the so-called Musa Polimnia, a fine collection of Etruscan and Roman ceramics and bronzes, as well as the Corbelli collection including materials from the Egyptian civilization. More recent materials include an imposing collection of art objects and furnishings formerly owned by the Tommasi-Baldelli family -one of the most prominent families in town- as well as a series of works by Cortona-born painter Gino Severini, one of the founders of Futurism, bequeathed to the town of Cortona by the master himself. Other exhibits include archaeological finds from the city and its surroundings providing a link to the modern section devoted to the development of the latter. After a first room providing an insight into local paleontology the subsequent rooms house orientalizing and archaic grave-goods from burials in the Valle Tiberina and the Valdichiana, at the edge of the Cortona sphere of influence, and, remarkably, valuable finds from Etruscan burials located in the close surroundings of Cortona, the so-called “Meloni” of Sodo and Camucia. An accurate reconstructive image is provided for all displayed finds including the well-known jewels found in the 1990s as well as sacred structures associated with the cult and burial of the dead. Particularly interesting is the display of grave-goods recently uncovered from a series of orientalizing circular burials affording a new and fascinating insight into the remotest Cortonese history. Significant testimony to the town’s great Hellenistic development is provided by a bronze tablet bearing one of the longest known inscriptions in the Etruscan language as well as by finds from suburban sanctuaries and monumental burials. The tour ends with exhibits from the Roman period (a period of extraordinary complexity and high-profile) including finds from the large Roman villa (currently under excavation) unearthed in Ossaia as well as from the vast network of roads connecting the major centres in ancient times. The tour then resumes, ensuring an ideal continuity with the lower section, with the medieval section housed on the upper floors devoted to the Accademia.
After the tour of the Museum we would reach the famous sites of the Etruscan tombs called Melone 2nd at il Sodo and the Tumulus of Camucia  to discover  the Etruscan burials built since the 6th  C BC for the local aristocratic families of princes and located in the close surroundings of Cortona and admire their incredible technique of construction. The Melone II of Sodo is located on the right bank of the Rio di Loreto. This burial site too may be dated back to the archaic period and consists of two separate inner tombs: the Tomb I featuring a pseudo-vault roofing was unearthed in 1928/9; the Tomb II was discovered in 1991 and contained a real wealth of golden grave goods.
In 1990 excavations brought to light on the east side of the of the mound perimeter a monumental altar-platform accessed by means of a stairway whose side-walls are decorated with reliefs and sculptural groups.
The Tumulus of Camucia was unearthed in 1840 by A. François. The mound is very large in circumference (about 600 feet) and consists internally of a first chamber tomb (Tomb A or François Tomb) and a second tomb (Tomb B) discovered in 1964 by the Archaeological Superintendency of Tuscany.

THE ETRUSCAN TOMBS ARE OPEN ONLY IN THE MORNIG (EXCEPT ON MONDAY) BY APPOINTMENT: AT YOUR BOOKING YOU WILL BE INFORMED ABOUT THE TOUR TIME
THE EXCURSION TO THE ETRUSCAN TOMBS CAN BE DONE IN 2 DIFFERENT WAYS
-BY YOUR OWN CAR
-ARTOURS PROVIDES IF REQUESTED A CAB SERVICE TO BE PICKED UP IN CORTONA AND DROPPED OFF WITH YOUR GUIDE AT THE ETRUSCAN TOMBS AND BACK TO CORTONA OR YOUR HOTEL.